The fact that the guy in this picture could end up running 12 marathons in 12 months  starting the year after that picture was taken is a testament to a lot of things and a lot of people.  Today I had to laugh because a pretty physically fit person called me to ask if I would be part of their relay running team.  Me, the guy usually picked toward the end in high school sports was being asked to anchor a running team.  Cracked me up.  Unfortunately I couldn’t do it as I already had a fundraising walking event planned for the same day, but I still got a kick out of even being considered.

In any event, this past weekend was my 12th marathon.  Steamtown marathon in Scranton, PA.  I started it the same way I started my first, with my friend Michele by my side for the first 11 miles or so.  Running with her is great because (a) she’s shorter than me and (b) she’s a doctor so if I get in trouble, the odds are I’ve got some good help by my side.

My cousin Terecia also ran it, but insisted I not stay with her as she didn’t want to hold me back.  It was her second marathon, and I applaud her fighting spirit to get through it.  I’m often asked which of my 12 marathons is my favorite, and I’m really not sure.  They all had different advantages.  The Hambletonian was my first – and in my hometown, so that was great.  The Adirondack Marathon had the coolest medal and was beautiful.  The Walkway over the Hudson Marathon crossed a river, so that was pretty cool. 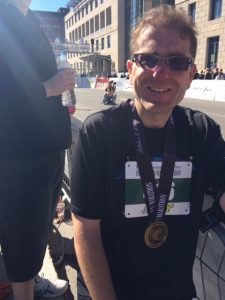 I’ve learned not to chase a specific time in marathons.  I like to be in the top 50% and usually am.  I’ve learned though it really is the journey and not the destination.  I show the picture above only to show you that no matter where you are, it’s not too late to make a change to get healthy.  In 2013, I was morbidly obese.  By October of 2015, I had run 12 marathons in 12 months.  I did it all through diet and exercise.  And if I can do it, so can you.

Living in the Hudson Valley of New York State, at age 40 (almost 41), I had a health scare and had to make serious changes in my eating and exercise habits. This is the story of how, I went from Morbidly Obese to being a Marathon Runner and ran 12 marathons in 12 months. After I ran several more, I did something I never imagined possible: I am an Ironman. View all posts by PlanetFitness.Fit