I started walking in the summer of 2013.  Walking was all I could do.  I took my first serious runs outside (meaning more than a few hundred yards!) in March of 2014 in Hawaii.  Nobody knew me so even if I looked downright silly I didn’t care.  By that point I was down about 100 lbs so while still overweight it wasn’t a disaster.

Now, back in Hawaii for my third trip there, I had 16 marathons done and running was a part of my identity.  My flight was around 6 AM out of Newark, direct to Hawaii.  I stayed up all night, got a (VERY) early run in on the treadmill to get part of my steps in, then headed to the airport.

We had a week booked at Marriott’s vacation club at Ko Olina, right in front of the path where I took my first serious runs.  I landed about 7 hours before my wife and kids (who had been vacationing in California for a bit before).  I got the rental car, drove to the hotel, threw my bags on the bed, put on some running gear and went out for a quick few miles on that same path.

One great thing about trying to get a step count and going to Hawaii is you pick up an extra 6 hours in your day.  So I more than finished my step count having slept most of the plane ride, went to the airport and picked up the rest of the gang.  I’m sure there are some places on earth that beat Hawaii, but I haven’t found it yet.

This is beautiful Ko Olina, Hawaii.  The hotel on the right is Aulani – a Disney property.  the jogging path goes in front of the hotels. 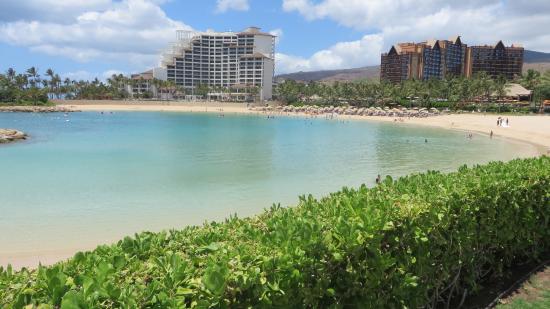