Unfortunately, the weather for the drive down grew rainer and less and less pleasant, and I didn’t make it to my hotel until about 1 AM Saturday morning (the marathon was Sunday).  Suffice to say, I decided to sleep in and see Raleigh.

The hotel, however, had other plans.  This has only happened to me once before, but the alarm clock in my room apparently was not turned off, so at 6 AM, less than 5 hours before I went to sleep, it went blaring off.   Now, I was naturally angry at the alarm clock, housekeeping, whoever caused the alarm to go off (it wasn’t me).  Rather though than let my anger stew, I did what any angry runner with a nearby 5K would do – I got up and went to the 5k race.  It was a rainy morning at the Chik Fil A race series – called Ellas’ Run, in Raleigh.  Cold and miserable, it was what it was.

My anger must have been appropriately channeled to the road as I was able to win my age group.  The prize was a great cow bell.  I’m normally not a 5k runner.  However, when you surprise yourself and finish first in your age group, it’s an awfully nice morning. 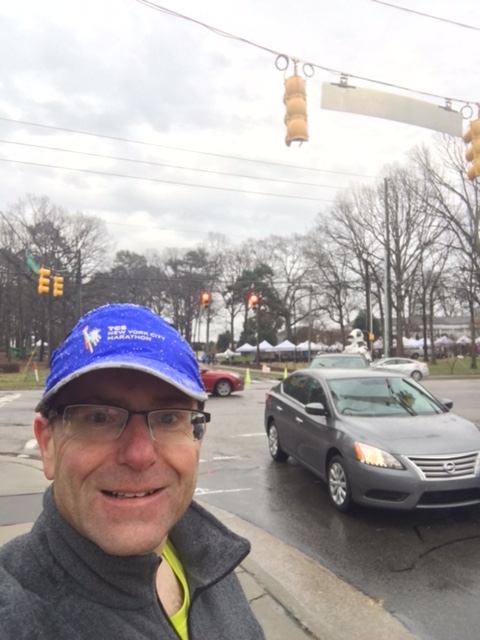