Now, 24 years later my wife dropped me off at 645 am so I could wait four hours to start my run. The NYC Marathon is epic for marathon runners. You run through parts of all five boroughs – starting in Staten Island, before ending in Central Park. You head right out over the Verrazano bridge and you are off.

I had a cold that day but wasn’t going to let that stop me. By the end I was really feeling it. Still, it was THE NYC marathon- the largest in the world. It was a great day. 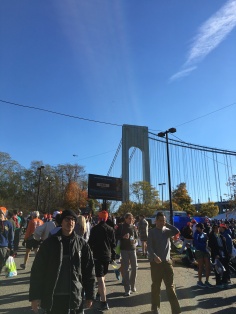 Living in the Hudson Valley of New York State, at age 40 (almost 41), I had a health scare and had to make serious changes in my eating and exercise habits. This is the story of how, I went from Morbidly Obese to being a Marathon Runner and ran 12 marathons in 12 months. After I ran several more, I did something I never imagined possible: I am an Ironman. View all posts by PlanetFitness.Fit